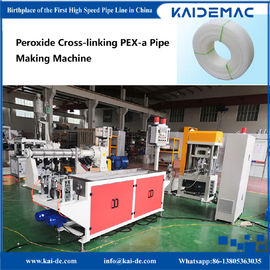 PEX-a pipe is produced by the peroxide (Engel ) method. This method performs "hot" cross-linking, above the crystal melting point. The pex tubing industry consider this tubing superior because the crosslinking is done during the manfuacturing process when polyethylene is in this amorphic state(above the crystalline melting point).