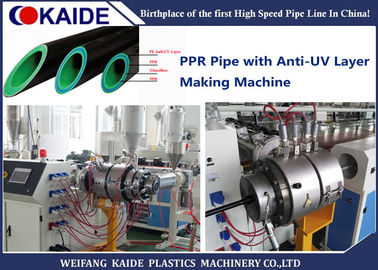 Inner pipes can be single layer PPR pipes, or 3 layer PPR Glassfiber Pipes. Outer black PE layer is separately coated by another extruder and die head on the line. Produced pipe sizes are 20-63mm or 20-110mm as per customer requirements.

adjustable co-extrusion die head, our patent product, can composite multi-layer evenly and rapidly and get optimal thickness of each layer quickly without adjusting the extruder rotating speed. Thus, the design can reduce the dependence on operator’s skill during the production process.

CONTACT us to get clear video and more details!!